Whether you are planning on having an intimate night with the one that you love, or bringing your friends and family back together to celebrate many years of marriage, anniversary dinners can come in every style, and size, imaginable. Here at Whitehouse, we believe that the anniversaries are just as important as the wedding itself, especially when you have to keep celebrating them year after year! Many of us will be familiar with the gifts and themes for the years following your special day: one year, paper, two years, cotton, three years, leather etc. but this does not mean you have to follow the crowd when it comes to ordinary gifts or dinner celebrations. How about, for paper, a menu for the night written in the style of a poem? What about, for wood [the 5th year], you have an anniversary lunch outside, using only seasonal foods? We believe the possibilities are endless, which is why we want to help you to feel inspired. Covering the first five years, this article will give you some ideas for gifts, tableware and thoughtful tidbits that will stop the first few anniversaries from becoming just another chore in your list of things to do. Remember, the wedding is just the beginning, it’s everything that comes afterwards that really counts… 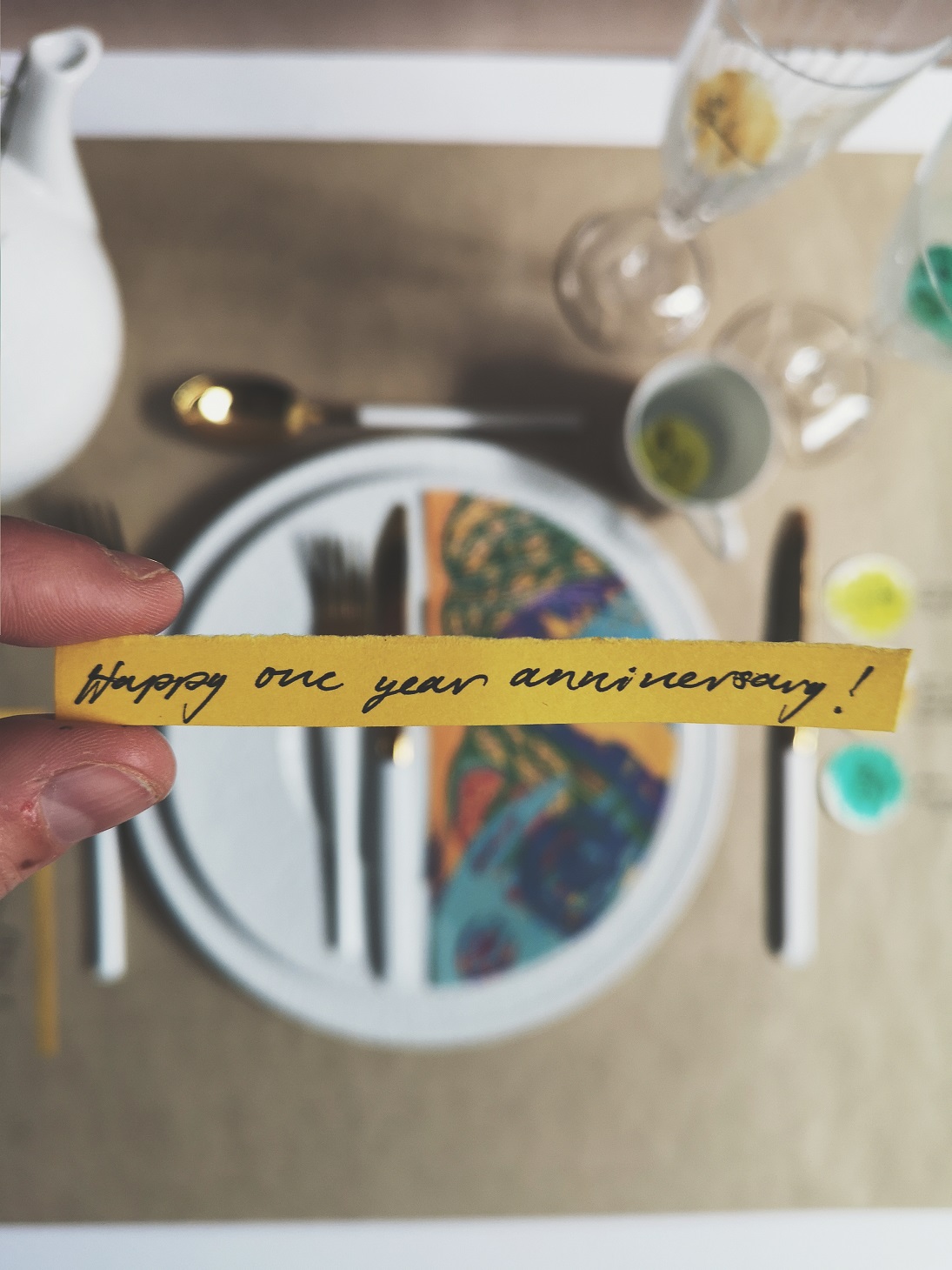 Your first year together as a married couple should, if cliches are correct, be the most magical. Stolen kisses, sorrowful goodbyes in the mornings and silly impromptu dance competitions in the kitchen are all features of this ‘honeymoon’ period. This means that, though the first year’s theme is ‘paper’, it should be no means be plain. The worst mistake you can make in this area is thinking that paper needs to be white. In fact, paper is probably the most interpret-able category of them all, since it can come in a huge variety of shapes, styles and textures. Our dinner was inspired by the idea of the homemade, the personal and the slightly imperfect, incorporating lots of DIY details to embody the excitement of this still-fresh romance. 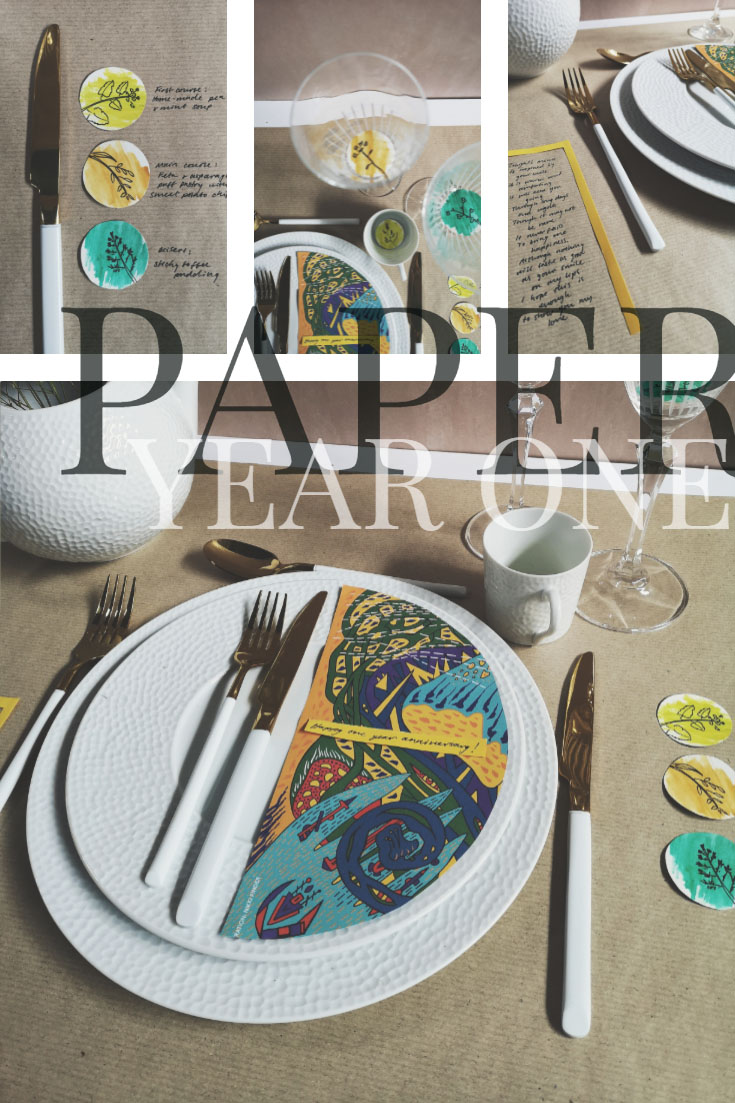 By using a set of raised-porcelain as the main plates, as well as using this same style for the teacup and pot as well as white and gold cutlery, we immediately removed the need for any more white on the table. Instead, we wanted to bring aspects of brightness by using yellow, which instinctively reminds one of happiness, halting monotony in its tracks. Brown paper is an easy way to bypass a tablecloth whilst also allowing another layer of creativity into your evening. With ours, for instance, we used it to write a short poem about the night, with the other side showcasing the 3 courses that were going to feature that evening. The little discs alongside them are made from simply brushing some watercolours over a piece of white card, cutting them into circles, then drawing very simple interpretations of flowers on top. When combining all of these, as well as a colourful design for the centre plate and a bunch of flowers within the teapot, the final product is one that has a great deal of personality, with a touch of professionalism. Undeniably adorable, yet easy to execute, this would propel you into the second year of your marriage in high spirits. 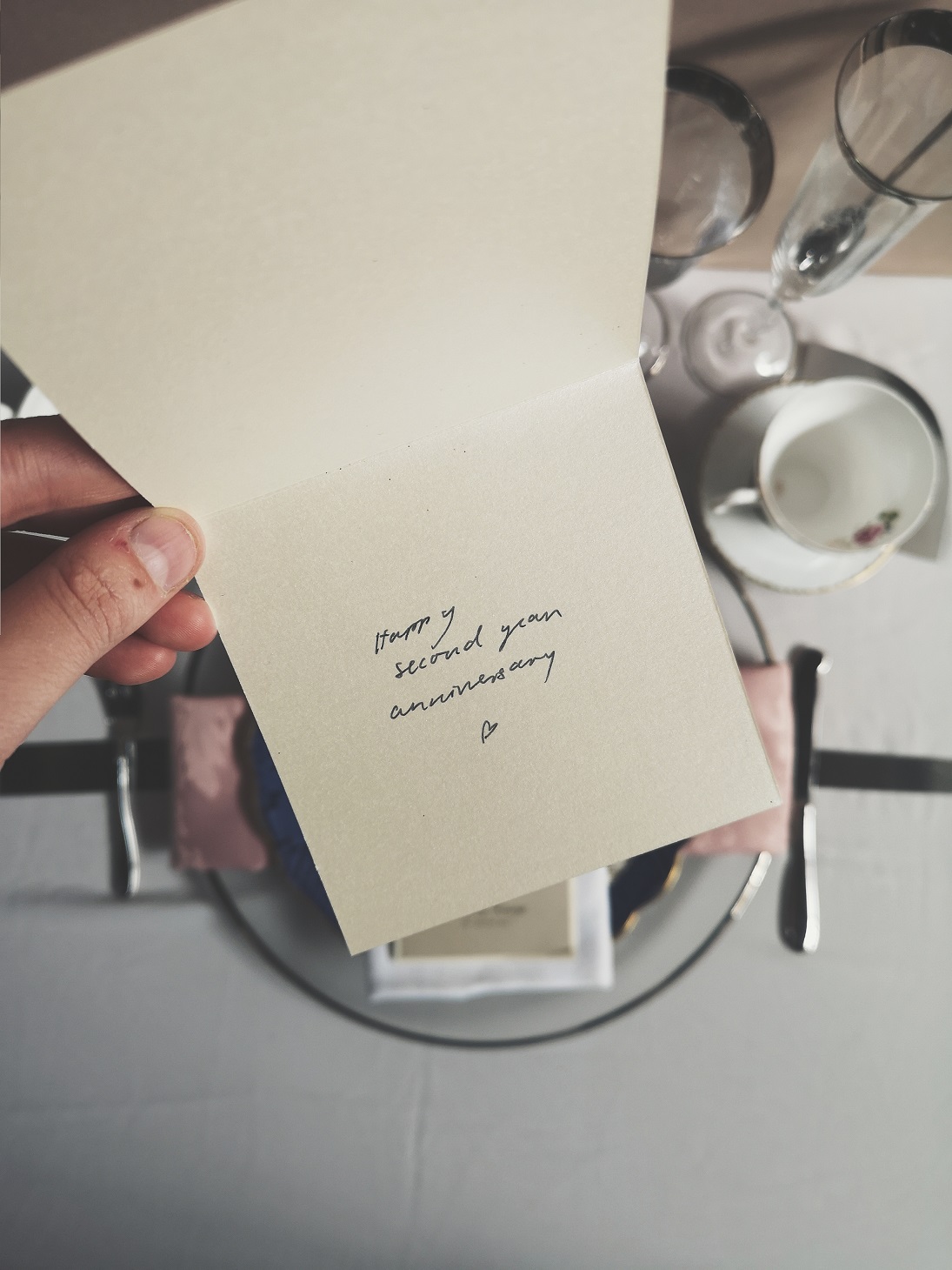 Once again, cotton may be seen as something simple, basic or even boring, however it can be manipulated and adjusted to fit around you as a couple. For us, when we think of cotton, we think of the empire that it once was: linking it to wealth, prosperity and progress. For this reason, we felt that a 19th century-style tea party would fit this image perfectly. Although you would probably just be hosting in your dining room at home, we implore you to use your imagination in picturing yourself within a grand ballroom, waiting on high-tea and cakes, examining the newest cotton fabrics from faraway places. 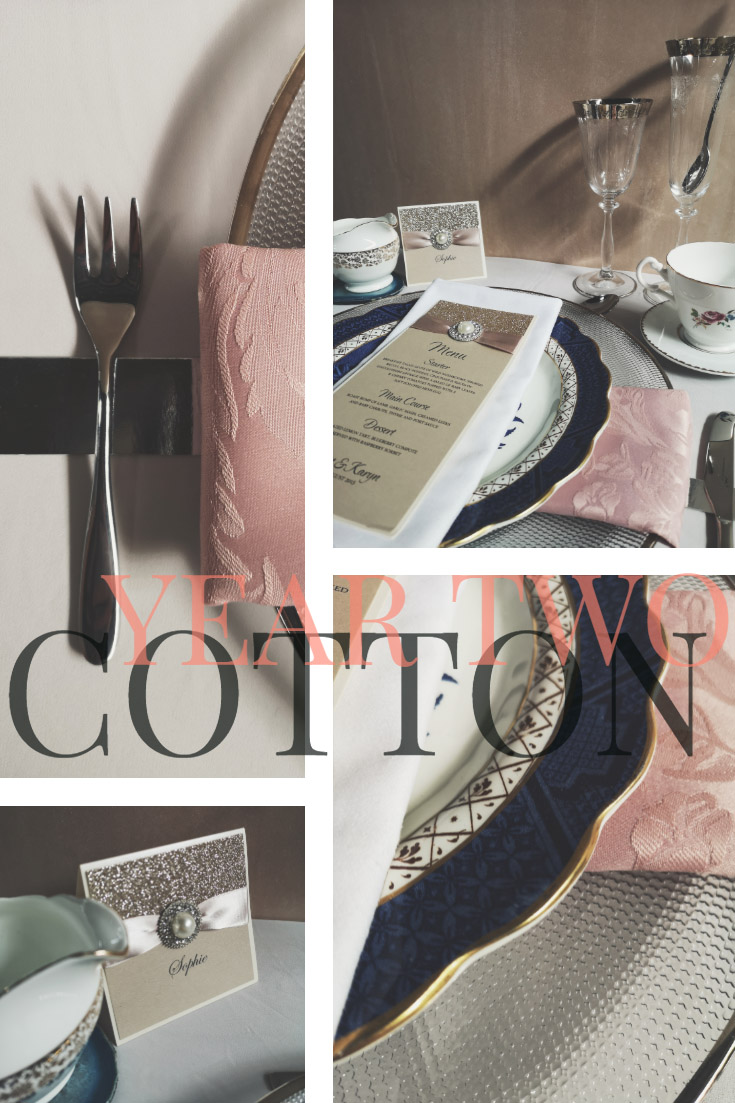 Though you are probably more comfortable in your marriage by this point, that does not mean that standards need to slip. For your second year together, it is even more important to show that you still appreciate your other half, which is why this whole theme is centered around grandeur. This scene mixes modern and vintage elements to nod its head at cotton’s extraordinary history and its commonplace use today. A simple napkin, for instance, is topped by an elaborately designed menu, combining past and present effortlessly. Although we included a full menu, you could also make this a setting for delicious cakes or macaroons [depending on the preferences]. We felt that by matching the menu and the place-card, you could make the table feel more professionally laid, with a small note inside the card to add a touch of thoughtfulness. Despite this idea being more refined, it still emulates a feeling of intimacy, with the knowledge that you shouldn’t ever take one another for granted. 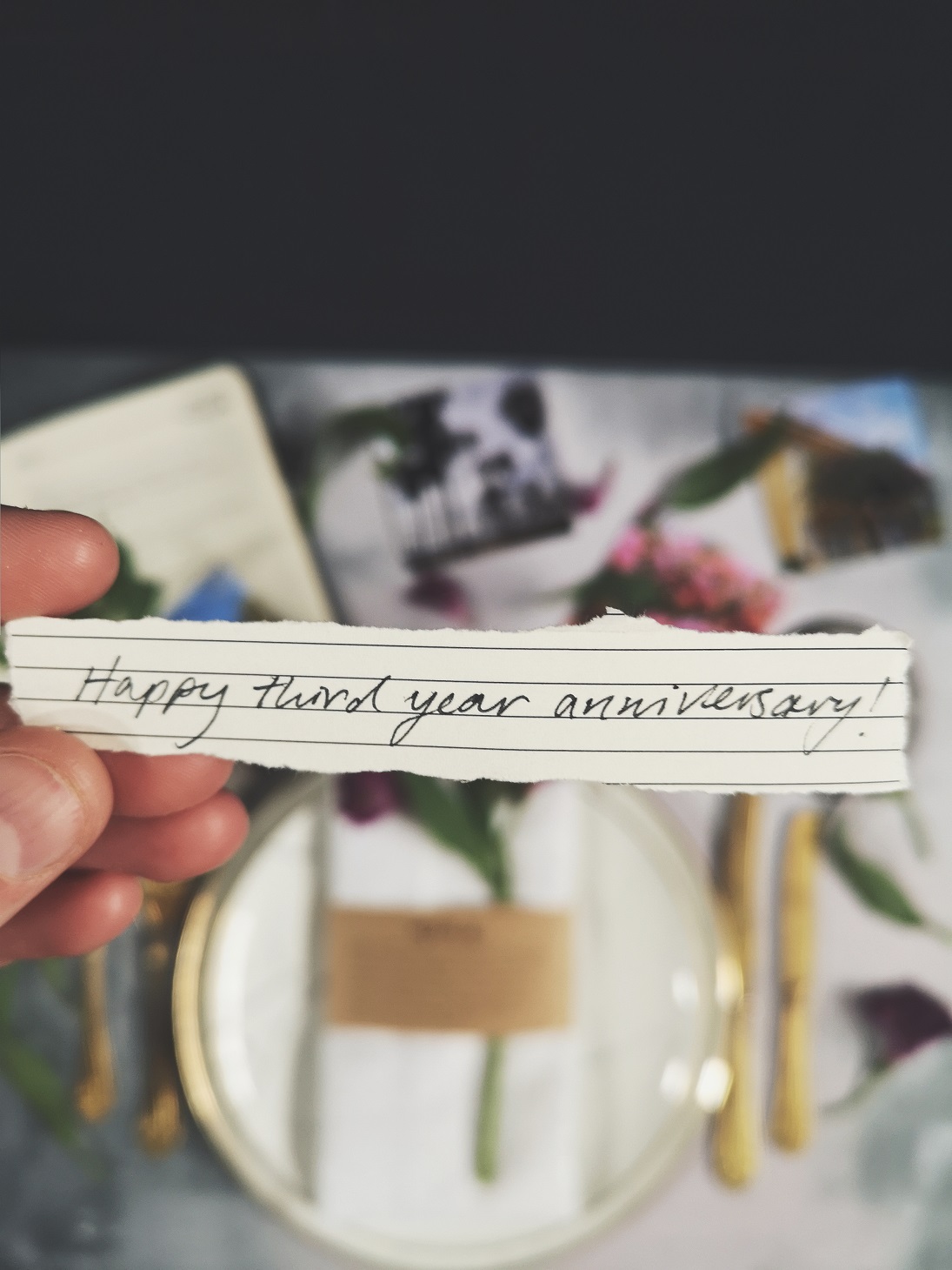 What does one see when they think of leather? Is it a watch with a handsome strap? A beautiful designer handbag? Or perhaps, a little more garish, a cow-skin rug? Of course, any of these would make most people incredibly happy, but does it really reflect on your time as a couple? For this year, the item that came to mind for us was a journal; leather bound to keep the memories within it safe and enclosed, and filled to the brim with kindness. This is something you would have to start straight after your second anniversary, but the final product would be something heart-warming. 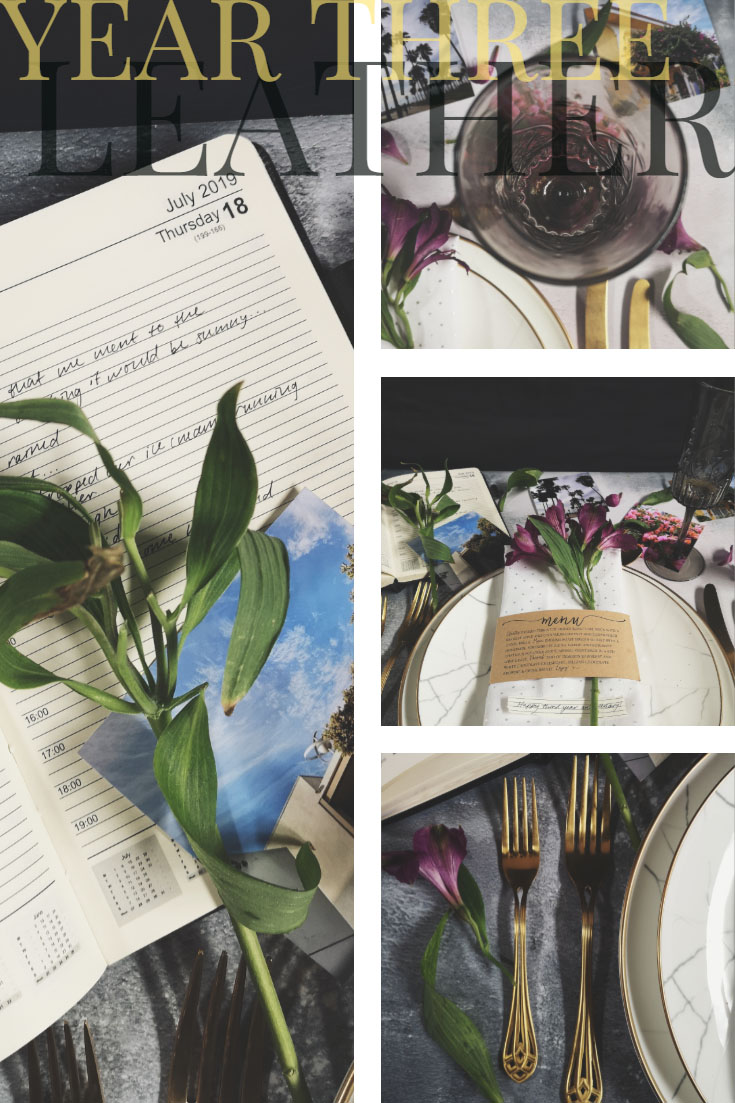 Leather can sometimes seem like the textile with the least amount of soul [despite actually being made from an animal]. It is hard, impermeable and opaque, three things that usually aren’t associated with romance, however it can also resemble permanence, reliability and excellence. Receiving something made from leather is always a treat, however we know that a leather wallet can sometimes feel impersonal. Instead, starting from your second anniversary, try keeping a journal of the everyday moments in your relationship. Things that made you laugh, made you cry, brought you together and made you stronger as a pair. Include photos, tickets, receipts and anything else that helps you to remember the special moments you chose to document. Then, when the anniversary comes around, you can share memories from your year together: reliving things that you had perhaps forgotten and remembering that every day with that person can bring something new. 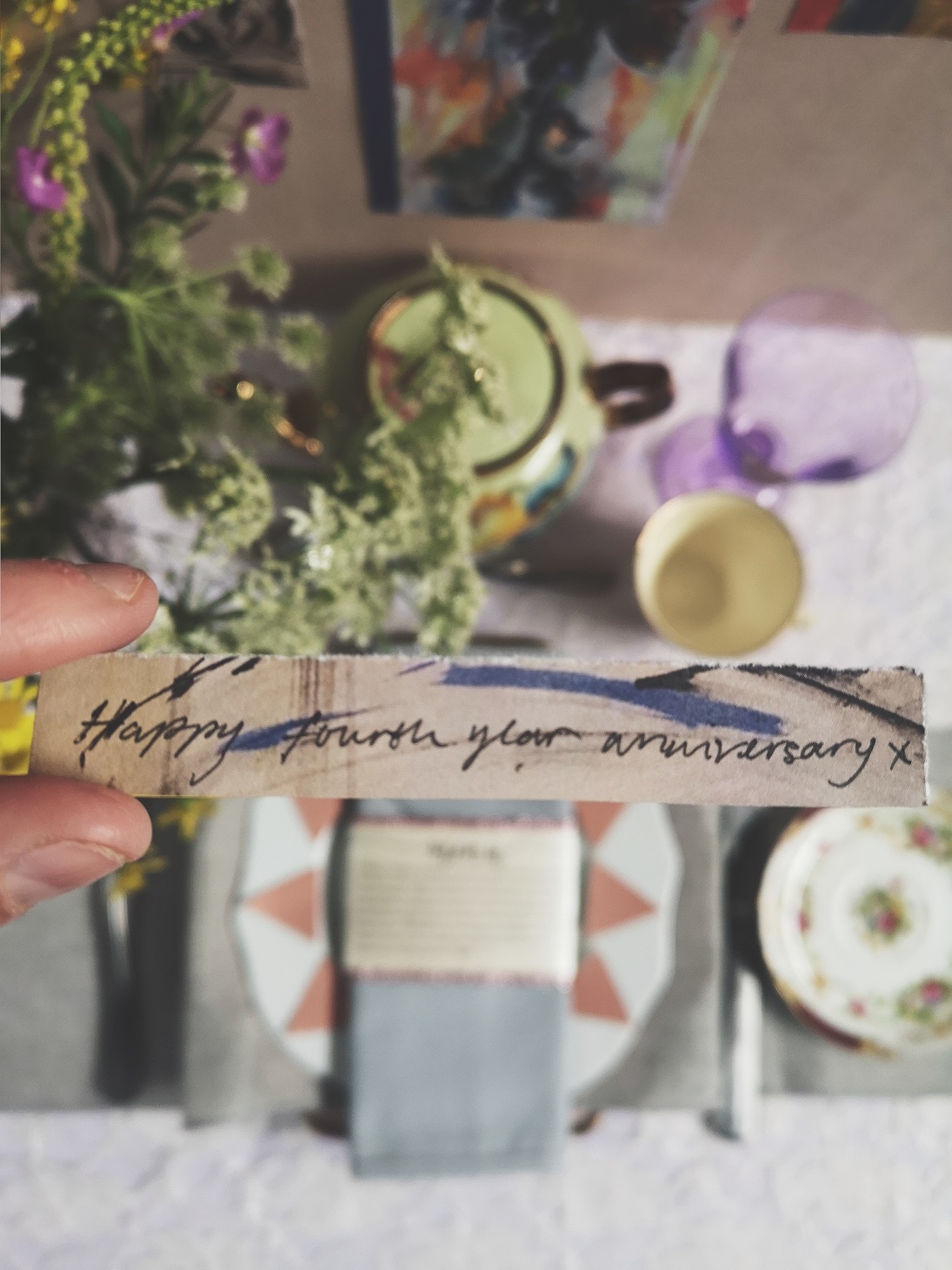 Some people may look at this theme and think ‘well this must be the easiest, just buy a lovely bunch of flowers, and you’re done!’ Oh you poor, poor soul. Have you learned nothing year? Just because the concept is simple, that does not mean the execution has to be as well. For this year, we felt that the idea of ‘season celebrations’ fit perfectly. This means looking at the season in which you chose to get married and reminding each other why you decided that was when you wanted have your ceremony. This means looking at florals, fruits and general decorations that reflect the season of your choice, with each having their own beautiful merits. 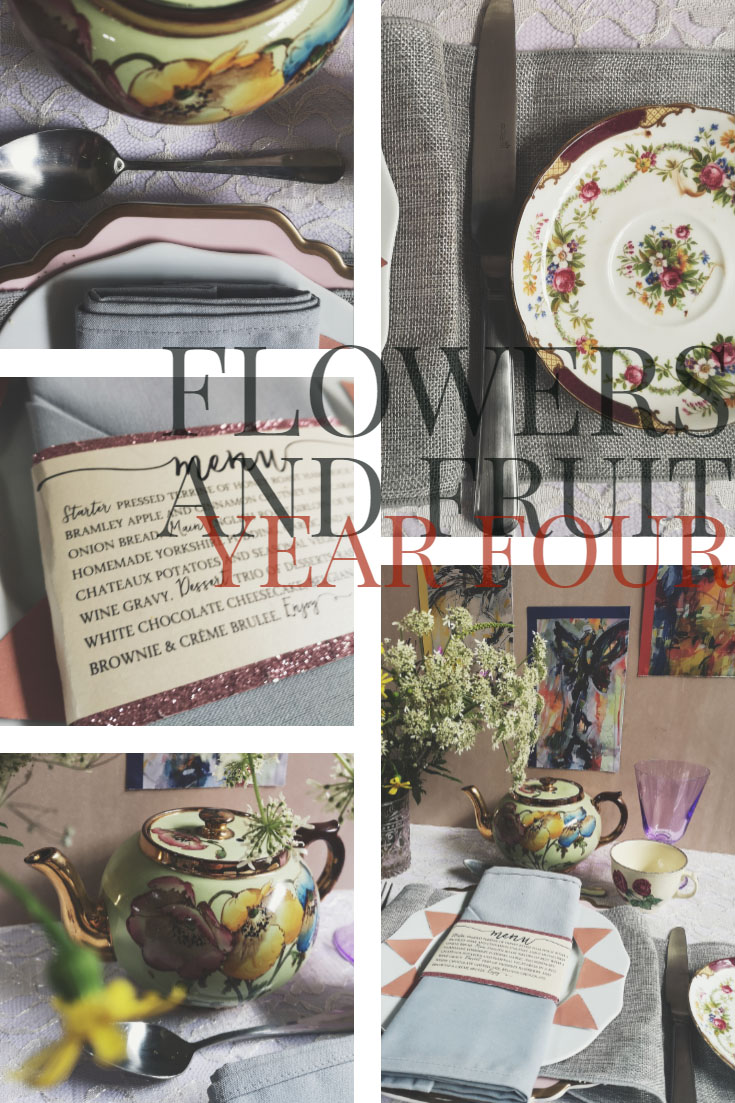 Since we are writing this in July, we felt it would only be right to have a summer-inspired table for the celebration of the fruit and flower year. By going out and collecting wildflowers, you can add that personal touch instantly, as well as letting your other half know you are going to the effort of creating your own bouquets, rather than simply buying a pre-made one from the shops. We wanted to keep the colours lively to reflect the vibrancy of the season, with a lace tablecloth to stop the scene from feeling heavy or serious. We also took some cuttings from a local magazine to stick on the wall, brightening the whole table and giving it an art-gallery feeling. This year is all about making your relationship feel fun and fresh: perhaps remembering when things were a little more impulsive, unrefined and free-spirited. Forget, for a day, about bills, taxes and responsibilities and instead think of one another and the things that initially brought you both together. 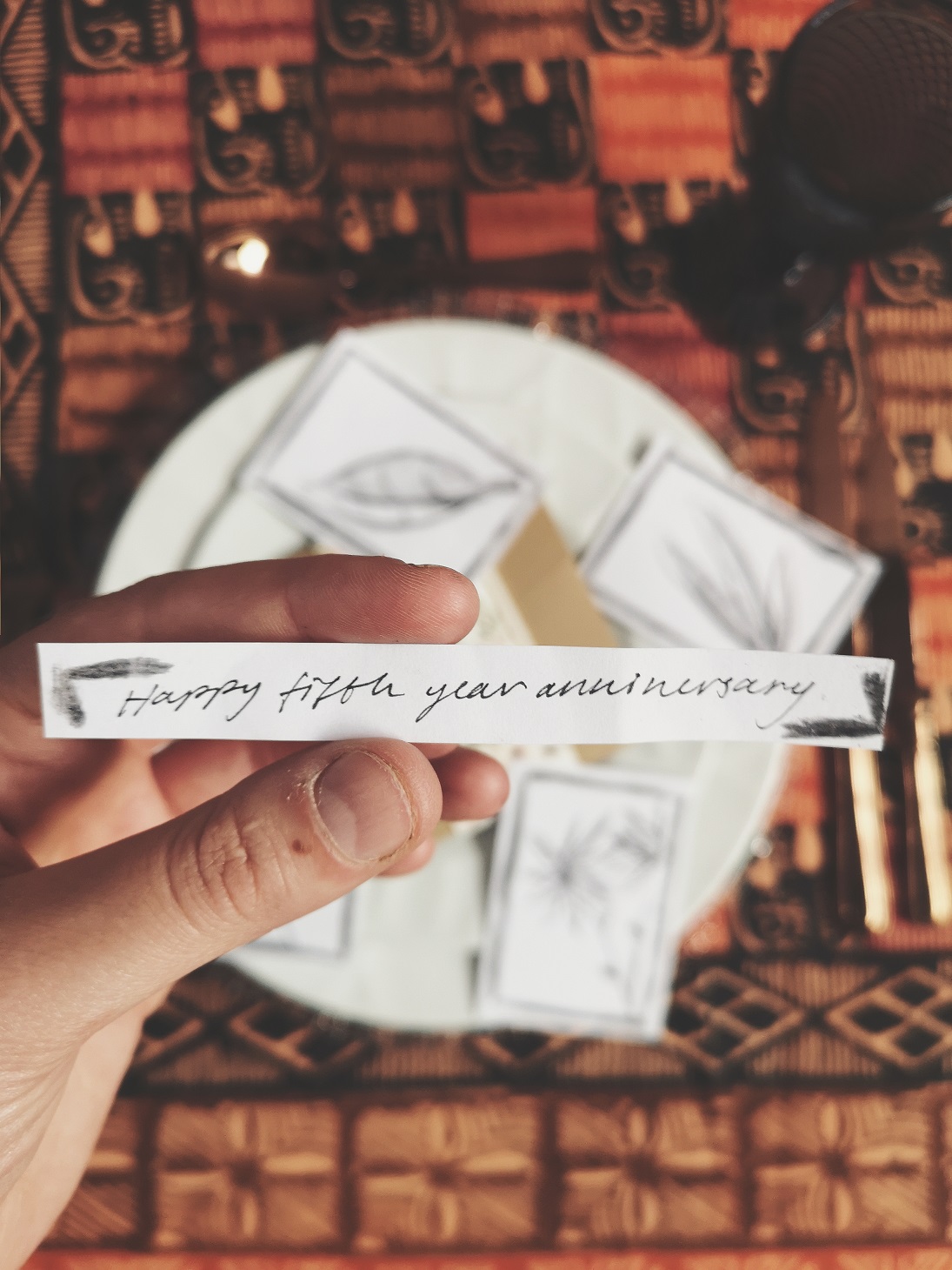 Wood was probably the hardest year to think of something unique, so instead we chose something so simple that it is often overlooked. Instead of ornate wooden objects, or things made of wood [like pencils or, of course, paper], we thought that enjoying the material at its source would gives this year the significance it deserves. By taking a picnic out to your local green space, you save money on restaurants, trinkets and travel, instead revealing in what nature has to offer. Of course, this is easy for us to say now, in the middle of summer, however we’re sure there are some beautiful wintry walks that would have the same effect as this. 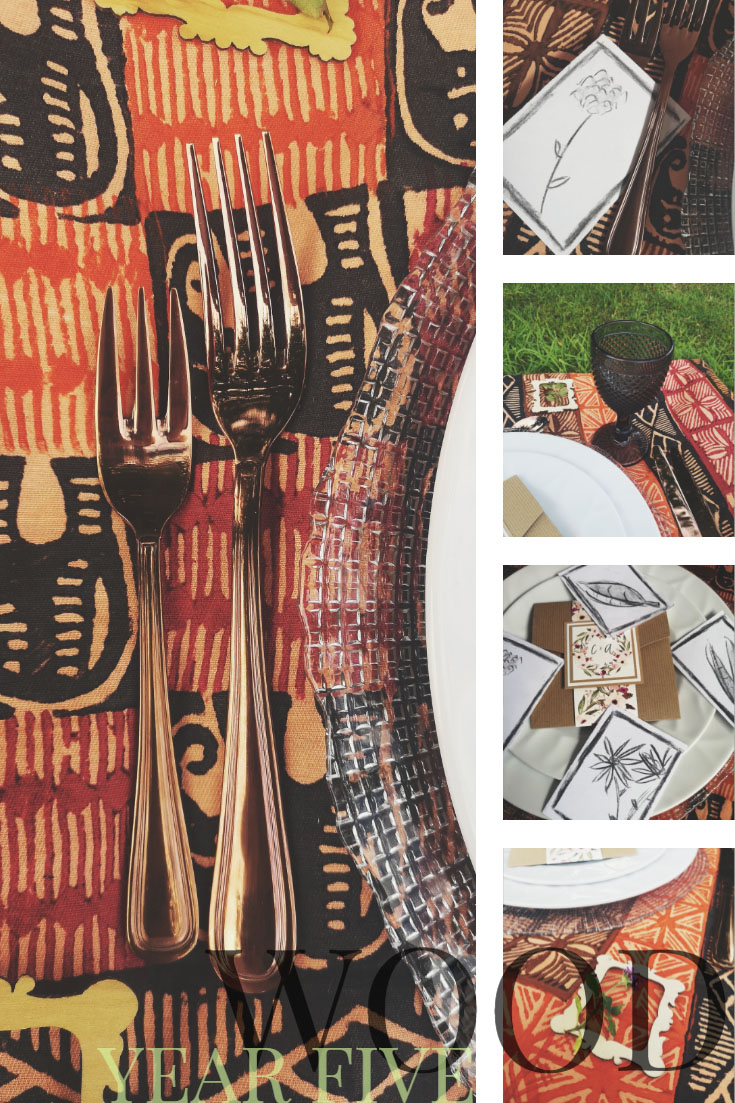 Firstly, congratulations on making it to five years together! Though people don’t put as much emphasis on it as the decade mark, we know that making it to five years is already an amazing achievement. Secondly, the final layout is something that is so easily repeatable, it’s hardly worth talking about it [but we obviously will.] The muted tones of our picnic blanket match the theme perfectly [with this one have an appropriately rustic pattern on it] with our crockery keeping the exuberance to a minimum. We included some charcoal drawing of the plants that surrounded, thinking that this might be a sweet activity to do together, instead of looking at your phones or talking about work. Sometimes it is the times when you are being quiet together that makes you appreciate one another’s company more. If you are desperate need of giving a present, then how about sponsoring a tree [or even an entire woodland] for your partner through the National Woodlands Trust? This way, you can create a tradition of visiting it every year on your anniversary, or, if you don’t have the time, just envisage the tree as a symbol of your relationship: strong, beautiful and hopefully, long-living.

We hope you feel inspired to do something a little bit different for you anniversary, or even for your wedding! Share this with a friend that has an anniversary coming up to help them do something unique and don’t forget to check out all our social media pages for more interesting ideas.